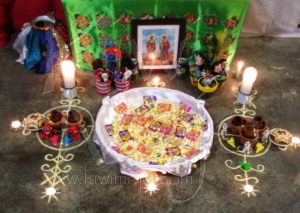 The truth of the Marassa is that they can manifest in any number.  Marassa Duex ,as we have already mentioned, is the Divine Twins; the two boys who are most often represented in the image of St. Cosmos and St. Damian.  Marassa Twa is the Divine triplets, those we see at the feet of Papa Marassa (represented by the image of St Nicholas).  The Marassa Twa are also the Divine girls, Faith, Hope, and Charity; and are often seen in that image.

The Marassa come to us in both Rada and Petro guides.  In Rada, as part of the escort that walks with Papa Loko, they are served in green and yellow, while in their Petro manifestation they take green and red.

The Marassa are the manifestation of the mysteries of the divine, and this ties in to the Haitian (and Benin) belief that twins are sacred.  Parents that give birth to twins are considered to be lucky, and are given the honourary names Manman Gimo and Papa Gimo, meaning Mama and Papa Marassa.  Twins themselves will often be referred to as ‘Marassa’ and in my own house, a frequent visitor to our parties and Fets is Mambo Aducei: or ‘Mambo Marassa’ as she is affectionately called.  Her and her sister are both gifted Mambo who work so well together.  Much love to them both.  Their presence is certainly a symbol of luck and one that is welcome at any Kanzo.

The Marassa do come to us as children.  In possession they will often laugh and cry, they will take the food from their laye and throw it around.  They will behave as children behave, and they particularly enjoy the company of other children.  Just because they are children, however, their power should not be underestimated.  The Marassa are in fact extremely powerful spirits, they hold immense knowledge and wisdom.  They are also extremely gifted healers, and are often called upon in matters associated with healing.

The Marassa in Rada are served on Thursday, with Petro Marassa being served on Tuesday.  All Marassa are served on Saturday.  At Fet they are served a laye, a woven plate upon which is given candy, cookies, bonbon sirop, popcorn, peanuts, and fruit soda. 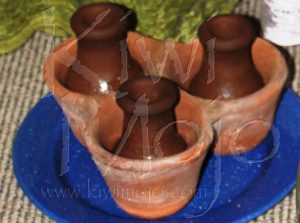 They are also served with special criche, which contain either two or three earthenware pots which sit in a base of connected clay cups.  Water is put into the pots, while small offerings of popcorn or other food can go in the dishes made by the base.

Marassa also take offerings of marbles, toys, anything that children will like.  It’s important to remember, just like with any twins, that what you give to one you should also give to the other.  If you are giving them marbles, make sure you give them both marbles.  If you give them toys, make sure it’s at least two the same.  It’s a good idea to obtain a reading to find out which Marassa walk with you, as you could need to give three the same if Marassa Twa are walking with you!

When you serve Marassa do it with fun.  Although these are among the most ancient spirits in the Vodou reglemen they are children.  Just as you approach children in everyday life with a fun spirit and an uplifted heart, do the same with Marassa.

There is a great deal that we will never know about the Marassa.  They are a great mystery.  Like Danballa Wedo they are ancient, and their traditions are older than we know.  They have been revered in many cultures, in Africa and amongst the Taino.  We follow the traditions of the reglemen and the guidance of our spiritual family in serving them as they have always been served; knowing that by following the traditions, even those shrouded in the mystery of mysteries, we will indeed reap the many rewards.